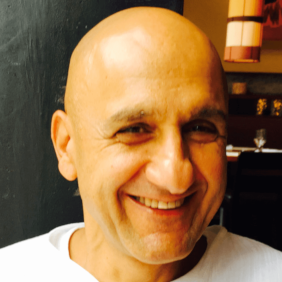 Chairman & Co-Founder: Intelligensi.com is the brain and heart child of Yosi Amram, a clinical psychologist, seasoned executive leadership coach and academic researcher. Previously a founder and CEO of two technology companies that he led through their public offering (IPOs), he is also a published academic researcher on spiritual intelligence and inspirational leadership.

Yosi’s interest in leadership began in the Israeli Air Force, where he received a number of leadership awards and had the fastest promotion track record in the history of his regiment. Though he excelled in this military context, he dreamed of a different model for leadership: one that is not only less command-and-control-based, but also more inspirational and transformational. He was fortunate enough to test his ideas in operating roles as a founder and CEO in each of these public companies, experiencing first-hand the payoff of clearly articulating a mission and values statement that provided a sense of purpose, integrity and cohesion for the organization.

For his doctoral research, Yosi was interested in the relationship between leadership effectiveness and spirituality in general, and more specifically, Spiritual Intelligence (SI). Prior to his research, no clear operational definition of spiritual intelligence, nor an understanding of how to measure it, existed. Therefore in order to develop and test its relationship to leadership, he had to develop both a framework for what SI is (1) and a way to measure it.

Following the development and validation of a measure of SI, Yosi was able to study and validate SI’s relationship and contribution to leadership. He then developed a model of Inspirational Leadership (IL), working with 42 company CEOs and 210 members of their staff (3) studying its relationship to leader effectiveness.  His research showed that the qualities and competencies of Inspirational Leaders, founded in greater emotional and spiritual intelligences, resulted in greater leadership effectiveness in terms of follower morale and commitment.

Yosi received his B.S. and M.S in engineering from M.I.T, MBA from Harvard, and PhD in Clinical Psychology from the Institute of Transpersonal Psychology. Yosi’s personal mission is to awaken greater spiritual intelligence and inspirational leadership on the planet, in service of healthier and more inspired self, leadership, and organizational life.

This website uses cookies to improve your experience while you navigate through the website. Out of these cookies, the cookies that are categorized as necessary are stored on your browser as they are essential for the working of basic functionalities of the website. We also use third-party cookies that help us analyze and understand how you use this website. These cookies will be stored in your browser only with your consent. You also have the option to opt-out of these cookies. But opting out of some of these cookies may have an effect on your browsing experience.
Necessary Always Enabled
Necessary cookies are absolutely essential for the website to function properly. This category only includes cookies that ensures basic functionalities and security features of the website. These cookies do not store any personal information.
Non-necessary
Any cookies that may not be particularly necessary for the website to function and is used specifically to collect user personal data via analytics, ads, other embedded contents are termed as non-necessary cookies. It is mandatory to procure user consent prior to running these cookies on your website.
SAVE & ACCEPT